The Neuroptera are divided into two sub-orders:

They eat huge numbers of greenfly and other small insects, so should be considered the gardener's friend. In the U.S. and Egypt lacewings are used commercially to control pests in the cotton crop. They are mainly nocturnal and are preyed on by bats, but to help them avoid the echolocation ultrasound clicks of bats they have ultrasound sensors in their wings.

The Beaded lacewing eats termites. It has an unusual way of stunning its prey before eating it - it farts on the poor termite! Then picks it up in its jaws and sucks its insides. Sometimes the fart is powerful enough to kill the termite.

The lacewing above and the larva below belong to the family Chrysopidae often called Golden eyes. There are 20 species in the UK, and about 1200 world wide, making this the second largest family in the Neuroptera. They all have prominent metallic-looking eyes as adults. Adults often enter buildings to hibernate over winter. Just leave them to sleep the winter away, and in the spring they will fly outside. They have ears located at the base of their forewings which are sensitive to the sonar clicks bats use to detect prey. Wing length ranges from 6 - 35 mm. The antennae of the adults are long and filiform (thread-like)

Some are used in biological control as they eat huge numbers of aphids, plant lice and mites. It has been reported that a lacewing larva can eat 300 - 400 aphids before pupating into an adult.

Lacewing eggs (above) are laid on plants at the end of threads of mucus which hardens in contact with the air. Some are laid singly and others are bunched together. Because the eggs are hanging in the air at the end of a very thin stalk they escape the notice of predatory insects such as ants.

Some Chrysopidae larvae have a rather grisly way of camouflaging themselves from predators. They cover their bodies with the dried out husks of the aphids and other insects that they have sucked dry. This can be seen in the two photographs below where the larva has decorated itself with the husks of the aphids that it had feasted on earlier. The drawing above shows the formidable jaws of the larva, and in the photograph below these jaws can just be made out. The larvae pupate in silken cocoons.

Below are brown lacewings in the Hemerobiidae family of which there are around 500 species world wide, 31 species in Europe and 29 in Britain. They tend to be smaller and less conspicuous than the green lacewings with a fore wing length that ranges from 3 - 18 mm. They are also much less studied than the greens. All the Hemerobiidae are brown or grey, and some are hairy. The larvae eat aphids and other small invertebrates as well as eggs. Most adults are also carnivorous, but many do drink honeydew. Most of those species so far studied lay their eggs singly or in clusters, and the eggs are unstalked.

Many island species have evolved to become flightless, with the hindwings absent or reduced, and the fore wings fused together.

There are about 328 species world wide, 10 in Europe and 3 in the UK. They are sometimes put into an Order of their own along with the Dobson flies - Order Megaloptera. The fossil record stretches back 250 million years.

Adults emerge in late spring and early summer. They are easy to recognise as the wing margins show no obvious forking of the veins, as is normal with others in this order and can be seen in the alderfly adult below, and their wings are folded in a tent shape and held over the body. Also the head is as wide as the body.

Adults live for just a week or two. They are weak fliers and usually do not stray far from water, so can usually be found on waterside vegetation. They eat very little as adults - just a little pollen.

The female lays her eggs in batches of 200 or more beside water or on vegetation overhanging still or slow moving water.

When the eggs hatch (usually in around 7 - 14 days) the larvae crawl or drop into water. The larvae live in silt and are carnivorous, and are very fond of eating caddis fly larva, crustaceans, oligochaete worms, chironomid larvae and may fly nymphs. The larvae have one long tail filament (see below). They pupate in the soil and in debris near the water in spring, and pupation takes around 3 weeks. 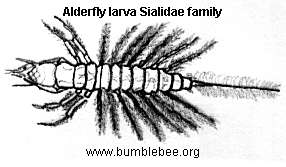 They tend to overwinter as larva, and so the life cycle is around a year. However in the U. K. the larval stage can last 2 years, and can be even longer in colder regions. 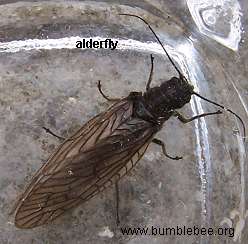 The adult alderfly above belongs to the Sialidae family, and is probably Sialis lutaria, also known as the Mud alderfly. The adult is 10 - 15 mm long, with glossy brown wings. Adults mate at night, and the female lays her eggs in ponds or slow moving water with high water quality. So where they are found there must be little or no pollution in the water. The larva of this species grows up to 25 mm long.

There are 2100 species worldwide making this the largest family in the Neuroptera. They are found mainly in arid and semi-arid areas of Africa, Australia, Asia and the Americas. There is just one British species, Euroleon nostras, found in East Anglia and around the south coast of England, and also in the Channel Islands.

Antlion eggs are unstalked and laid singly in open areas, holes, under bushes, caves and rock overhangs. In areas occupied by humans the eggs are often laid outside but in the shelter of buildings. The outside of the egg has a sticky coating that allows sand and soil particles to stick to it. Adult females do not have an ovipositor.

Larvae. Not all larvae construct pits to capture prey. Others sit and wait for the prey to stray within reach. However it is the trap digging larvae that have been the most widely studied. The pit fall trap the larva constructs to capture its prey is seen in the drawing above. Above is a Myrmeleon formicarius pit fall trap with just the jaws of the larva visible, and below is the fat, hairy larva. The larva constructs the trap in loose sand, by shuffling backwards in a circle, and flicking the excavated sand over its head.

Once the trap is dug it waits with just its jaws on the outside for an insect to fall into the trap and slide to the bottom. The jaws are huge and perforated so the larva can inject digestive enzymes to soften the tissues, then suck the juices of its victims. The most common victims are ants - hence its common name.

If the victim puts up a fight the ant lion will either drag it under the sand or whack it against the side of the trap until it is subdued. Any victim falling into the trap and trying to get out will be bombarded with sand to try to make it lose its footing.

Common pitfall trap locations are cave entrances, under overhanging rocks, and around human habitations. The larva (above) is a curious beast, it cannot walk forwards, but only backwards. Also it never emits any faeces until it is ready to emerge from its chrysalis which can be 1 - 2 years after hatching from the egg. Then it emits the accumulated faeces. Prey availability seems to be the determining factor in the length of the larval stage.

Ant lion communities? Ant lion larva have very specific habitat requirements - fine sand or dust, dry and sheltered from rain. As these areas are hard to find some suitable areas appear to be populated by a community of ant lion larvae. However there is no interaction between the various larvae - they are there because of the lack of suitable habitat elsewhere.

The ant lion adults are mainly nocturnal resemble dragonflies and lacewings, but have thicker, clubbed antennae. Adults are not strong fliers and tend to fly at night. They are seen in sandy areas in southern Europe from June - August. Adults are also carnivorous, living off smaller insects that they find crawling over vegetation. Myrmeleon formicarius (above) has a wing span of 35 mm and resembles a lacewing or a dull-coloured damselfly, but with long antennae. It flies at night in June and July.

Its eggs are laid singly or in groups in dry, sandy soil.

Snakeflies are sometimes put in an Order of their own; the Raphidoptera. The snakefly gets its name from its long neck and its method of catching prey, (usually soft-bodied insects) by raising its head and lunging. There are about 225 species world wide, 75 in Europe, and 4 in Britain.

In the UK they are usually found in wooded or shady areas, and prefer pine and oak trees, where their favourite food is aphids. Adults are found from May - July. After pupating the adults fly to the tree tops to feed on aphids, and so are seldom seen by us. Unusually, during mating the male is under the female. Females have a long ovipositor to lay their eggs in the crevices of bark on dead and decaying trees.

The larvae live in the burrows of wood-boring beetles, and feed on the grubs they find inside the tree. The larvae can be parasitised by ichneumonid wasps. Pupation takes place in debris either at the foot of the tree, or bark surface. In the U. K. the life cycle usually takes 2 years.