These are the hawkers, and they are the largest and swiftest European dragonflies. There are 11 British species. The adult body length ranges from 50 - 120 mm, and the wingspan is up to 150 mm. 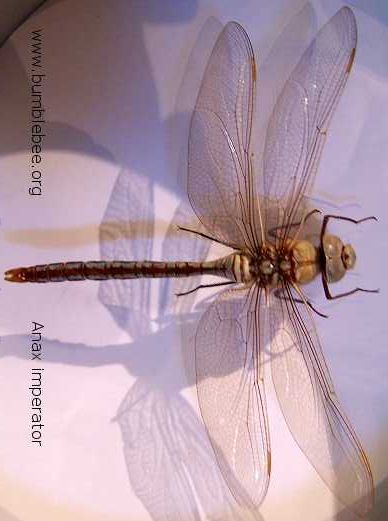 The preserved specimen above is an adult male Anax imperator, Emperor dragonfly.

It is usually bright blue with a green thorax, and has a thick dark line down the abdomen (the colours fade in preserved specimens).

It is one of the largest British species with a wingspan of 106 mm and a body length of 78 mm.

The adult flies in June, July and August, and it is a hawker. It is usually found flying over ponds and canals in the south of England. And it catches its prey around reed beds.

After hatching as an adult and feeding, it returns to the waterside about a week later to mate. The female lays her eggs in floating debris and plants in weedy ponds and canals.

It spends 2 years as a larva. The nymphs can grow to over 5 cm long.

Above is Aeshna cyanea, the Southern hawker, emerging as an adult. Its wingspan, once the wings are fully pumped up would be 100mm, and its wing length 43 - 50 mm, body length around 70 mm. The adult body is dark brown with green and blue markings.

Adults fly from June to October in the U. K. This dragonfly is often seen around smaller ponds. It is mainly found in the southern part of the country, but there have been a few Scottish sightings. The larva is found in ponds, lakes and canals, and prefers shallow, weedy waters.

Above is an adult Anax tristis, which is found in Africa. Its body length is 120 mm, and wingspan is up to 135 mm.

The Golden-ringed dragonfly, Cordulegaster boltonii, above, flies from the end of May to mid September, and is classed as a hawker. Adults are fairly easily identified by their black and yellow rings, and bright green eyes. The wingspan is around 101mm and the hind wing length is 41 - 46 mm; body length 74 mm in males and 84 mm in females, with the abdomen length being 54 - 60 mm in males and 60 - 64 mm in females. The female has the longest body of any U. K. dragonfly. It is commoner in the west of the U. K. Its range extend across Eurasia as far as India.

The adult patrols streams in a predictable flight path, and rests in reeds, heather and on boulders. Adults can sometimes be seen quite far from water. Adults eat damselflies, other dragonflies, wasps, beetles, midges, flies, butterflies, and even bumblebees.

The female lays her eggs in mud, and has a relatively long ovipositor. She usually lays her eggs in the morning, hovering over the mud and water thrusting her ovipositor into the sediment with a stabbing movement. The eggs hatch after a few weeks. It takes 2 - 5 years before the adults emerge, which they do at night, and these adults will not be sexually mature for another ten days.

The nymphs are large, 35 - 42 mm, and hairy and found in acidic moorland streams with sand or mud at the bottom, also in boggy pools. The nymphs lie hidden in the detritus, with just the tip of their head and tail sticking out, waiting to ambush passing prey such as insect larvae, snails, tadpoles and tiny fish.

Above is the nymph of Aeshna grandis, the brown hawker. The adult flies from July - October in England and Ireland. It is fairly easily recognised as it has amber-tinted wings and a brown body. The adult wingspan is around 102 mm, and body length 73 mm. Adults tend to hawk around pond edges and down the middle of streams. The males are fiercely territorial and will attack other males. The females deposit their eggs in plants or floating wood.