Libellulidae family, commonly known as the Darters, Chasers and Skimmers

This family has 1300 species worldwide, and 14 native British species. Libellulids are shorter than most other Ansioptera, and a flattening of the abdomen makes them appear stout.

Unlike other Ansioptera they do not patrol a territory, but tend to perch in the same spot and dart out to capture any passing prey. In the UK the adults fly from May until September. 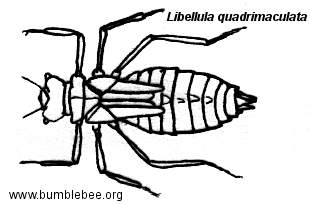 Above is the nymph of Libellula quadrimaculata, the Four-spotted chaser. It is found in all types of still water. The adults fly from May - August, and have a body length of 39 - 48 mm, and a wingspan of 70 - 80 mm.

Libellula depressa, below in the Libelludidae family, is also known as the broad-bodied chaser and broad-bodied Libelulla.

The males have a blue abdomen except for brown spots at the side. The females have yellow spots down the side of a brown abdomen. Both have dark brown patches at the base of the wings. The wingspan is around 74 mm and body length around 44 mm.

The males are territorial and use the same perch for days on end. Females tend to rest on vegetation near to ponds.

They are fairly common in southern England and Wales. Adults fly from late May - September. They fly from dawn to dusk, and prefer habitats that are open.

The nymphs are 40 - 46 mm long when fully grown. Their body is fat and rounded. They are tolerant of semi-polluted waters, so can breed in canals, and are also found in large ponds and the weedy margins of lakes.

The adult female lays her eggs in floating timber or vegetation close to the water's edge.