The order Opiliones is in the phylum Chelicerata, (spiders, harvestmen, scorpions, mites, ticks and horseshoe crabs). The Opiliones are closely related to spiders, but their body does not have the distinct division between the cephalothorax and abdomen seen in the spiders. Nor do they have poison glands or silk glands, so they cannot spin webs. They do have stink glands, though. These produce noxious chemicals to deter predators. The harvestman exoskeleton is covered with spines. hairs and bumps.

There are around 5000 species world wide, 110 in Europe and 27 in the U. K. Their body length ranges from 1 - 20 mm, and their leg span can reach up to 20 cm. Harvestmen got their name as they were most commonly seen towards the end of summer as crops were being harvested. The fossil record goes back 400 million years.

Many are omnivorous, some are carnivorous, feeding mainly on small arthropods and snails, but will eat anything they can get hold of. Some will scavenge on dead organisms - even bird and mammals. They will also eat fruit, vegetation and fungi. However each individual species will have a fairly limited range of preferred foods.

They are mainly nocturnal, and tend to be found in moist habitats, or near moisture.

Usually males have longer legs and smaller bodies than the females.

All have eight long legs, though often one or more can be missing, and unlike other arachnids opiliones do not re-grow lost legs, or part of lost legs after each moult. When a predator grabs a leg the harvestman can detach it and run off. The detached leg continues to move and twitch for a few minutes distracting the predator and allowing the harvestman to escape. Usually the 2nd pair of legs is the longest, and is used to feel and probe the substrate.

They have 2 eyes, and these are are often located in a turret-like structure called an ocularium, and the eyes face sideways (see Leiobunum flavum below and Plangium sp. at the bottom of the page). The eyes are used for little more than detecting the intensity of light, but it is possible that they may also detect movement.

The young undergo their first moult within hours of hatching, and will moult 7 or 8 times before they are mature. There is around 10 days between moults.

The long legged species moult by hanging upside down from vegetation as the newly moulted legs would be too soft to support the body.

Little is known of their mating habits. In the U. K. they become sexually mature from around July onwards. There are reports that some species may have "courting grounds" where females gather to choose a mate. At these places the males fight using their chelicerae (fangs) to bite off the legs of their rivals.

In other species, the female has less choice. When the male finds a suitable female he chases her and tangles his legs with hers preventing her escape until he has achieved a mating.

Unlike spiders male opiliones have a penis.

Females have an long ovipositor, and normally it is located in a sheath, but when the time comes to lay eggs it is extended (see Leiobunum rotundum below). The end of the ovipositor is shaped like a drill bit with chitinous teeth for digging. Oviposition takes place soon after mating. In some species the male guards the female while she oviposits, stroking her body gently with his legs.

The eggs are laid in damp soil, moss, rotting wood, etc. shortly after mating (see the drawing of a female laying her eggs below). They are spherical, usually white, yellow or pale green and around 0.5 - 1.0 mm in diameter. Laid in batches of up to 120 at a time from late summer to early autumn. The colour of the eggs darkens with time.

The time taken for the eggs to hatch depends mainly on temperature, and can take from 20 days to 6 months. In the U. K. most species lay their eggs in the autumn, and they don't hatch until the following spring.

The female will lay several batches of eggs in different locations. In all she can lay hundreds of eggs. Once she has laid her eggs she does not return to them. 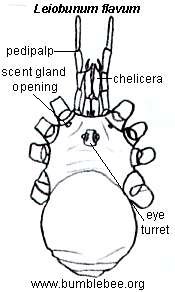 Parthenogenesis has been reported in some species.

Life span in temperate regions is usually just one year. Those living above ground will be killed by frost.

Phlangium sp. below, is mainly nocturnal. It is in the Phalangiidae family, which has 200 species world wide. Their leg span can reach 10 cm, but their body length is rarely longer than 1 cm. 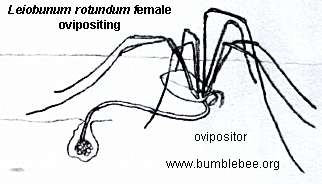 Leiobunum rotundum (above) is one of the most common species found in the U. K. Individuals reach maturity from July to November. It is found in thick vegetation, woods, hedges, marshes, walls and fences. And is less common in more open and dry habitats. It occurs all over Europe and North Africa.

Female body length is 5 - 6 mm and males are 3 - 4 mm long. The longest leg is around 58 mm long. Males have a red/brown body. Females have a lighter abdomen with a dark rectangular spot in the middle.

It is found in Europe, North America and Northern Asia. It has been introduced to New Zealand.

This is a very common harvestman from summer to early winter in low vegetation in woods, sand dunes and heaths. It is sexually mature from June - November.

The one above and below had a red velvet mite attached to it. These mites are relatively large, soft, brightly coloured, and have fine hair. They feed on other mites, springtails, aphids, etc., and use the harvestman as a means of transport (phoresy).