There are about twenty species of grasshoppers that can form migratory swarms, and it is these we term locusts. Below is a typical locust body. Locusts tend to live their lives in what is known as the "solitary phase". What this means is that they live alone and tend to hop away from other locusts when they come into contact with them. However at times when there is a large population of locusts these contacts become more frequent, and it is then that the locust can enter into what is called the "gregarious phase". Frequent contact with other locusts causes the release of a pheromone that changes locust behaviour causing them to swarm. In the solitary phase their most common colour is green or any other colour that matches their background making than inconspicuous. Whilst in the gregarious phase their colour changes to a black and yellow or orange, making them conspicuous.

During this phase they tend to crowd together and act as a swarm. Once they become adults they can fly, and will fly off as a swarm to find food, land and eat until there is no more food, then fly off and repeat the process. The gregarious phase occurs in years when there are a large number of eggs in the soil and the environmental factors, temperature, moisture, etc. are right to allow a large percentage of those eggs to hatch and survive. The female lays eggs in pods of around 120 eggs, and each female can lay about 5 pods, so around 600 eggs in all.

The locust and Volvo cars

Locust swarms number millions of densely packed insects flying at speed. So how do they avoid collisions? Well, they have special neurons in their brains to detect any rapidly approaching object (predator or other locust). This system has been studied and used by Volvo to help them design a collision avoidance system for their cars. 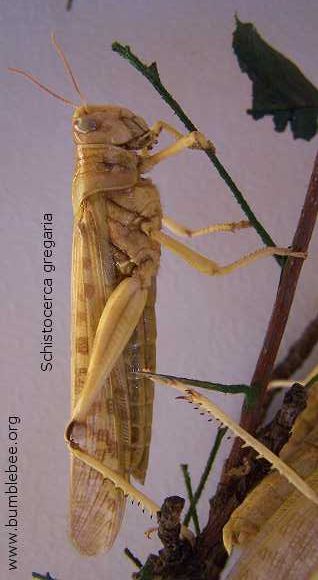 Above is a preserved specimen of the desert locust, Schistocerca gregaria.

In the Plain of Seldon in northern Nigeria a swarm of locusts settled and fed for four hours. When they left there was no vegetation over an area measuring 25 x 5 km, and that same area was covered with a layer of locust excrement 2 cm deep.

As the locusts arrived they blotted out the sun and made a noise that the locals described as being like that of a large waterfall. Their weight was so great that they broke branches off trees, and the noise of their eating was like the sound of a bush fire.

A swarm can contain 50 billion individuals capable of eating 100,000 tonnes of vegetation per day. In a bad year locust swarms can cover a fifth of the Earth's land surface.

Locust flight speed has been recorded as 4.4 metres per second. Compare this with other insects.

These locusts used to plague the USA, too. One swarm that flew over Nebraska in August 15 - 25 1875 was estimated to contain 25 - 50 million tonnes of locusts. The species became extinct in the USA in 1902.

The Bush locust, Phymateus sp., above, is found from Africa across to India, and when fully grown can reach 70 mm long. Some species in this genus undertake long migratory flights. They congregate in huge numbers, often completely covering a tree or bush so as to resemble foliage. They are able to eat a number of plants that other animals find toxic. When disturbed they will rustle their wings, and can excrete a repugnant fluid from between the joints in their thorax.