Rotifers are mainly freshwater, but one Class (see below) is marine and some species can be found world wide, but most commonly in in humid terrestrial habitats. About 1800 species are known, all ranging in length from 0.1 - 3.0 mm, and their normal life span is just a few days.

They tend to inhabit shallow waters, living on the bottom or on submerged vegetation or other surfaces and can be found in all types of water body from puddles, gutters to large lakes. The can also be found in damp woodland and meadows, especially in cushions of moss where there is a film of water allowing movement.

Many tissues are syncitial and the number of nuclei is fixed. The anterior corona of cilia is used for movement and feeding. The cilia set up a water current to bring food particles to the mouth.

The body is often covered in sculptured cuticle into which the corona can be drawn. The foot can also be drawn into the cuticular covering. The toes or spurs, when present, serve as an anchor. They are almost transparent (see right and below), with only the digestive tract showing colour.

They move by creeping along surfaces, aided by the foot, or by swimming through the water with the beating of the coronal cilia providing propulsion. When they creep the corona is usually retracted into the body, and the adhesive secretions produced by the pedal glands stick to the substrate. When swimming the foot is retracted. There are three Classes.

These do not have a cuticular covering, males have never been observed, and the females appear to be obligatorily parthenogenic. They can survive extremes of temperature and desiccation for years. The cilia are arranged in 2 flat discs, and when the cilia beat this makes the corona look like 2 revolving wheels. As these were the fist rotifers to be described, they were given the common name of "Wheeled animacules".

Philodina roseola (above) survives desiccation by encysting - the cysts are pink, and common in dried up rain gutters, and also moss cushions where it uses its toe to attach itself.

Rotifer neptunis, above, is 1 mm long when fully extended, but can retract its body like pushing in a telescope until it is a third of this length. The females produce live young.

This class contains the largest number of species (see Notommata copeus, above and Keratella quadrata below ). There are both freshwater and marine species in the Monogonata. 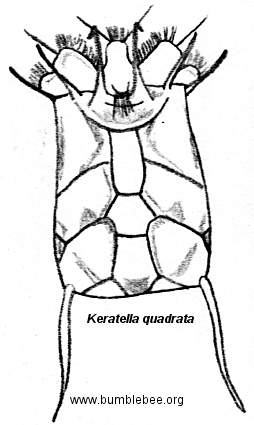 Sexual reproduction has been observed, although males are few, absent for most of the year, and much smaller than females. Keratella quadrata is a freshwater rotifer. Notammata werneckii, below, is a parasite living inside filaments of green algae. 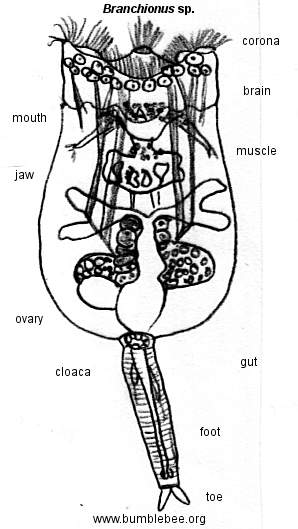 This is the marine Class; they are relatively large and live in the gills of crustaceans. Hydratina senta, below, has small toes.