About 350 sipunculans have been described so far. They are found worldwide in soft sediments, crevices and holes. They are generally from 15 - 30 cm in length and burrow in sediment. They have been found at depths of up to 500 m, but are more commonly found in coastal and shallow waters, and between tidemarks.

The body wall is formed of layers of circular and longitudinal muscles.

They have a retractable organ called the introvert, with the mouth at its tip (see below Dendrostomum pyroides). The mouth is surrounded by ciliated tentacles covered in mucous, and food particles are moved to the mouth along these tentacles. When the introvert is retracted into the trunk the animal takes on the shape of a shelled peanut - hence its common name. The introvert is extended only when the animal is feeding.

The trunk is muscular and the introvert is extended by the hydrostatic pressure exerted by the contraction of the body wall muscles against the coelom (see Sipunculus nudus below).

The digestive tract is coiled and U-shaped, and the intestine is long. The nephridia are located at nearly the same level as the anus.

The sexes are separate, but reproduction can occur by transverse fission with the hindmost fifth of the parent constricting, then detaching to become a new individual.

It is thought that Sipunculans may share a common ancestor in the Annelida (though it is important to note that Sipunculids are not segmented worms) or Mollusca or Echiura.

Golfingia elongata, above, inhabits the lower shores of sandy beaches. It was discovered on the golf course in St. Andrews (Scotland) when a golf ball landed in a small depression on the sand near to one - hence its name.

Below is Lecathylus gregarius, a fossil peanut worm from the early Silurian, 428 - 423 million years ago, from what is now Blue Island, Illinois in the USA. 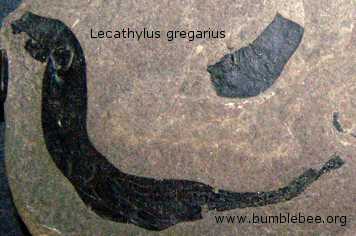