Scorpions are found in the tropics and sub-tropics, and are mainly nocturnal, spending the day in hiding. There are almost 2000 different species described so far, ranging in size from 8.5 - 230 mm long. The biggest is the imperial scorpion from West Africa which is over 21 cm long. The smallest are just a few mm in length. However during the Silurian and Devonian there were giant aquatic scorpions around 2 metres long. One of these giants can be seen today in the Natural History Museum in London.

Their long tail, usually has five segments, ends in the venomous sting. The sting is a bulbous base ending in a sharp, curved barb. Usually the potency of the venom is inversely proportional to the size of their pincers. So the smaller the pincers the stronger the poison. For more on scorpion venom see below.

The pedipalps are large and end in pincers, and the legs in a pair of claws (see below). Some species can make a hissing sound by rubbing their claws against their legs.

Eyes. Scorpions have up to 12 eyes. Usually there are 2 large eyes, raised up and facing the front. Then 2 rows of smaller eyes on either side of the head area. However the cave dwelling species may have no eyes at all.

Pectines (see Androctonus australis below) are chemo-sensory appendages, and they consist of three rows of chitinous plates ending in comb-like teeth. The pectines are close to the ground surface, and as the scorpion moves they can touch the ground and sweep just over it. Each pectine has from 5 - 50 teeth, and each tooth is covered in thousands of sensory hairs.

Book lungs. Scorpions have 4 pairs of book lungs that open to the surface as spiracles. Some species are able to control the size of the spiracle opening, and so restrict water loss. 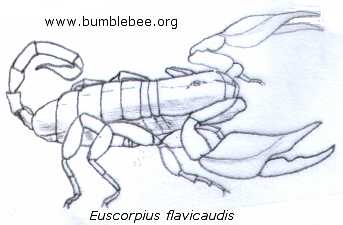 Above is Euscorpius flavicaudis.It a fairly common scorpion in southern Europe, and there are a few small colonies established indoors in the UK. It lives in crevices under rocks, bark and walls grabbing anything small that passes close by. Its body is dark brown/black, and it legs and sting are yellow/brown. It is not aggressive, and its poison has no effect on humans. It can reach 4 cm long when fully grown, and makes a good choice as a pet for a beginner.

Scorpions in this genus are relatively large, with most being longer than 10 cm, and they are usually black or dark coloured. They have a stridulatory (sound producing) organ which consists of a rough patch on their pedipalps which they scrape against a set of bristles on the first pair of walking legs. As with many large scorpions their venom is relatively mild, and is said to resemble a bee sting. 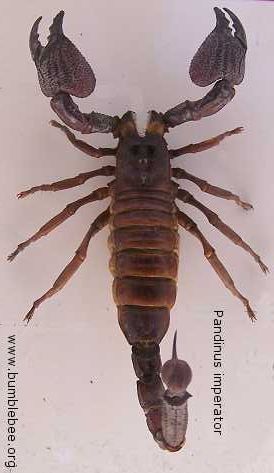 Above is Pandinus imperator, the emperor scorpion found in African tropical and rain forests. It inhabits burrows up to 30 cm long. Its sting is painful, but the poison is only mildly venomous, and cannot kill a healthy human adult. It can grow as long as 20 cm and has a life span of around eight years. Pandinus imperator is popular as a pet scorpion, and it will kill and eat anything it can catch.

Pandinus viatoris, like many scorpions, catches it prey by ambush.

The venom of most scorpions, as far as man is concerned, has a similar potency to that of a wasp. However some have poison potent enough to kill a human. The venom of Androctonus australis the fat tailed scorpion (see below), which inhabits the Sahara, is as toxic as a cobra's, and can kill a dog in seven minutes, and a human in 6 - 7 hours. Around 8,000 people die each year as a result of scorpion stings in Mexico alone. 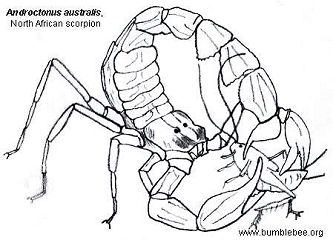 Scorpion venom is a neurotoxin, so affects the nerves causing paralysis of cardiac and respiratory muscles. The sting can be used to paralyze prey, but its primary function is defence. The venom exits the sting through 2 pores either side of the tip. The venom is produced by 2 glands at the base of the sting.

Medicinal use of scorpion venom

Scorpion venom and cancer. In medical trials the venom of the Middle Eastern scorpion Leiurus quinquestriatus is being used to deliver radioactivity directly to cancerous tumours in humans. The venom is non-toxic to humans, and binds to a receptor found on tumour cells. So makes a perfect delivery system as it bypasses healthy tissue. It is also being trialled for operations to remove cancers in the brain. If the chlorotoxin is tagged with a fluorescent dye it will illuminate the tumour, thereby allowing surgeons to remove only the cancerous tissue, and leave the healthy brain tissue unharmed.

In bypass surgery scorpion venom is used to block a human-produced protein which replaces new blood vessels, and could block blood flow during the surgical process. (Cardiovascular Research, DOI:10.1093/cvr/cvq305.)

Scorpions mate at night. The male holds the female's pincers in his own. They both arch up their abdomens until their stings touch, then they dance. The dance lasts for a few hours to a few days! Mating occurs the following day. The male deposits a spermatophore on the ground and pulls the female over it until the sperm mass is taken up by her. After mating the the male is sometimes eaten by the female. A female can have from 6 - 90 young depending on the species and the quality of habitat, and the young are born fully formed. The young crawl on to their mother's back until after their first moult, during this time, which usually lasts around two weeks, the young do not feed.

All scorpions are carnivorous hunters and can detect the footfall of a beetle or the wing beat of an insect more than one metre away, but many of them tend to sit and wait until something wanders near before attacking.

Scorpions are real survivors, they can return to life after being frozen for weeks and can survive being submerged for two days. Some species can live without eating for a year. They are also long-lived; with some living for 30 years.