There are about 200 species of Pulicidae worldwide and all feed on mammalian blood. Some are unspecialised and can live on as many as 30 different mammal species.

The eggs. Females lay their eggs as they feed, and the eggs drop into the host's nest, burrow or bedding. The eggs are pearly white, oval and about 0.5 mm long. 4 - 8 eggs are laid after each blood meal. A female can lay several hundred in her lifetime

The larvae are pale, legless, and worm-like grubs with biting jaws which usually live for 2 -3 weeks.

They are about 1.5 mm long when they first hatch; growing to around 5 mm before they pupate. See the human flea, Pulex irritans larva and the dog and cat flea larvae above and below. The larvae don't have eyes, but they do have jaws and backwardly-facing bristles.

The larva eats partly digested blood in the faeces of the adult fleas, particles in the host's faeces, and any other food particles.

The pupa (see the photograph below) can lie dormant until they are disturbed. So it is possible to move into a house that has been empty for months and suddenly find adult fleas everywhere. This behaviour is of great advantage to the flea, as it would die of starvation if it had hatched out in an empty house. Particles of debris stick to the silken cocoon of the pupa and hide it - see the cat flea pupa below.

The pupa are triggered to hatch into adults by vibration and body heat. This usually signals the return of the host to its sleeping area or den.

Adult flea bites can cause allergic reactions and discomfort, and the flea can be host to parasites that it passes on to its host. For example bubonic plague (Black Death) was passed to humans in bites from the rat flea. It is estimated that around a third of the entire population of Europe died in the Black Death, and there are still occasional outbreaks of bubonic plague in certain areas of the world today. See below for more disease transmitted by fleas. Adult fleas range in size from 1 - 8 mm long. Both males and females suck blood.

Pulex irritans above and below, drinks human blood and is commonly known as the human flea. It has the typical flea body being compressed sideways, chestnut brown in colour and shiny. Adult body length is 2.0 - 3.5 mm. The maxillary palps are often mistaken for antenna but the true antennae are minute and rest in grooves. Note the rear pair of legs which are modified for jumping. P. irritans can jump more than 200 times its own height. Like all fleas the body has numerous backward-pointing spines and combs. These are used in identifying the different species, and they also make the animal difficult to remove from hair. Even after you have caught your flea killing it is not so easy as the exoskeleton is hard.

Lifecycle. The female lays from 8 - 12 oval, smooth, white and sticky eggs at a time. They stick to floorboards, furniture and clothes. Depending on temperature, these hatch in 4 - 11 days. The larvae (see above) are white at first, but change to a reddish colour. These eat for around 2 weeks before making a pale silky cocoon in which to pupate. In another 2 weeks, if conditions are favourable, the adults hatch out. In humans the bite of a flea is recognised as a number of small dark red spots surrounded by an area of pale coloured skin.

Pulex irritans was once the most common flea found on humans, and it also lives on pigs, goats, foxes and badgers. It can jump 30 cm.

Human fleas first showed up in Europe around 1000 years ago. It is believed that the Vikings caught them when they visited N. America, then transported them to Greenland, and then to Europe.

Humans can be parasitized by the dog, cat and rat fleas. 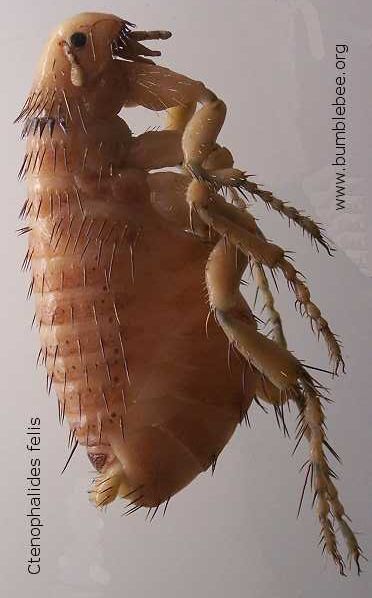 The female cat flea can lay over 20 eggs a day at an average rate of 1 an hour. The cat flea can stay in its cocoon for as little as a day or over a year depending on conditions. 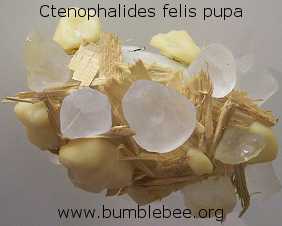 The cat flea is one of the most powerful jumpers and can reach a height of 34 cm. This is the equivalent of a human jumping 600 feet! Though, of course it is the cross-sectional area and small size of the flea as well as the resilin pad that makes this possible.

The dog flea adult is just 2 - 3 mm long. Dog and cat fleas can carry a tapeworm (Dipylidium caninum) that can infect dogs, cats and humans. The fleas' larva (see below) are infected with tapeworm eggs, the dog swallows the adult flea while grooming and the tapeworm now infects the dog.

Does your dog/cat have fleas?

Usually the first sign that your dog or cat has fleas - apart from scratching - is finding little dark specks of flea faeces in their hair. Around the base of the tail and the neck are places fleas like to live. The dark specks are easily seen in light hair. In dark-haired dogs you can clean the brush or comb over a piece of white paper. If you find dark specks, put a drop of water on them. If they dissolve into a reddish brown colour they are flea faeces, as the faeces are largely composed of blood.

So usually this means continual treatment of pets as they can easily pick up fleas from untreated pets or wild animals. Flea infestations in wild animals can be massive. 5000 fleas have been found in a single bird's nest, and over 7000 have been removed from a single hedgehog.

The largest of British fleas is the mole flea, Hystricopsylla talpae.

The hedgehog flea, Archaeopsylla erinacei, rarely lives on man or other mammals.