Thysanura range in size from 0.5 to 2.0 cm. They have carrot-shaped bodies with 3 long segmented tail filaments. The filaments are bristled. They also have 2 cerci (singular: cercus) which can be mistaken for legs, see the image below. They run very fast and are difficult to catch. They undergo many moults - even as adults which is very unusual for an insect. They may live for as long as five years, and take around a year to reach maturity.

Silverfish require high humidity and usually live in buildings in colder climates. They feed on foods high in carbohydrates, and some may even be cannibalistic on occasion. There are around 370 species worldwide.

The females can lay eggs throughout the year. A female can lay around 100 oval eggs in batches of as few as 2 - 3 in crevices and under objects.

The eggs are smooth and white when first laid, but turn wrinkled and brown after a while. The eggs hatch in around 2 weeks and reach maturity in just 3 months, but will not hatch unless humidity is at least 50%.

For the first few months, or until the third moult the silvery scales are absent.

Silverfish are able to re-grow legs etc. which have been lost as they moult throughout their lives. They can live for over 3 years.

The male must perform a dance for the female, then he deposits a spermatophore on the ground. Then he attaches signal threads leading from it to guide the female to its whereabouts. Although some species are parthenogenic, so have no need of males.

There are around 350 species of bristletail in the world. 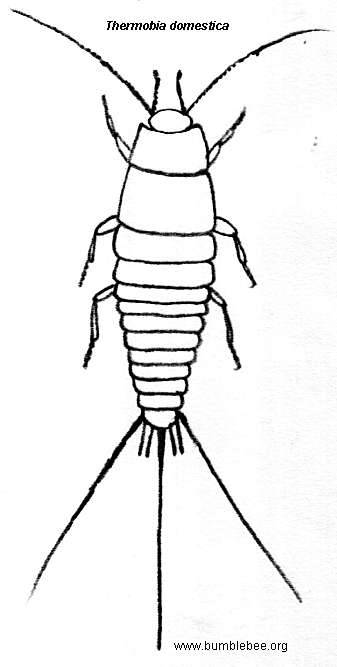 The firebrat (see Thermobia domestica above) is a similar shape to the silverfish, but does not have the metallic scales, and is usually a little larger. It can run fast, and even jump by flexing its abdomen.

It is found in very warm locations such as bakeries. It is often nocturnal and feeds on detritus. The lifecycle is similar to the silverfish. It too will moult throughout its life, and in the UK this can be as long as two and a half years and over 60 moults. Non-metallic scales appear after the 4th moult.