There are 889 species of tick world wide, and 24 British species, most of them in the Ixodiae. Ticks transmit a greater number and variety of disease causing organisms that any other arthropod in the world. However fewer than a quarter of the species spread disease, but those that do tend to have a wide range of hosts.

Transmission of disease usually occurs through a bite. The disease organism will be located in the salivary glands of the tick, and enters the host when the tick returns excess fluids back into the host. However transmission of disease can also arise from the tick's body secretions, waste products, or even its squashed body.

There are 4 stages to the tick lifecycle:

To complete their life cycle ticks must eat three meals from three separate hosts. After eating a blood meal a tick can be 3 cm in length. 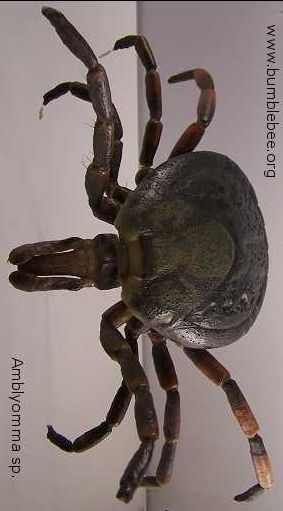 Ticks in the Amblyomma genus, above and below, is a relatively large tick at 6 - 7 mm long (unfed length) including the mouthparts (engorged females can be up to 20 mm long). There are 130 species in the genus; most found in hot climates. The adults feed on large mammals. Diseases transmitted by these ticks include, Rocky Mountain spotted fever, ehrlichiosis, and anaplasmosis.

Ambylomma hebraeum, the South African Bont tick, above, is found on giraffes, buffaloes, elands and cattle, and occasionally on sheep and goats. It prefers to feed on hairless areas, e. g. under the tail and on the genitals. It lives for three years, and can transmit Ehrlichia ruminantium to cattle, sheep and goats, Rickettsia bacteria causing tick bite fever to humans, and the protozoa Theileria mutans which causes benign theilerosis in cattle. Its natural habitat is the savannas of South Africa, but they have been found feeding on humans returning from African holidays.

Its long mouthparts make manual removal difficult, and the wound left by this may become infected by bacteria or parasitic flies. 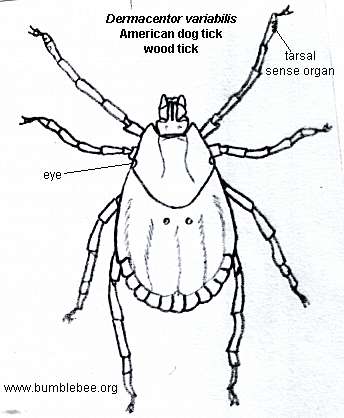 Above is Dermacentor variabilis, the American dog tick or wood tick. It can transmit Rocky Mountain spotted fever and tularemia. It is found east of the Rocky Mountains and on the Pacific coast. Its preferred host is the dog, but it will feed on other large mammals, including man. It can reach 1.5 cm in length after a full meal. 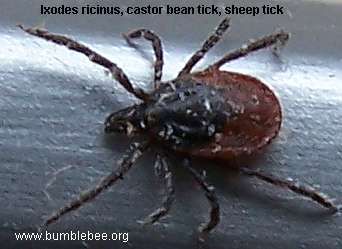 Above and below is Ixodes ricinus, the castor bean tick or sheep tick. In the photograph below the bars are in mm. The tick above is either a male or a female that has not yet swollen with a blood meal. In the photograph below the top tick had just been taken off my dog where it had been sucking her blood, and the bottom tick is either male or had not yet started to suck. A female is just 1 - 2 mm long before feeding, but up to 10 mm long and 135 times her initial volume after a blood meal. 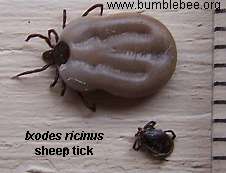 This tick needs high humidity, and is commonly found on rough, undrained grazing land where there is a mat of decaying vegetation under which the ticks have the humidity they need to survive.

his is one of the most common ticks in the UK, and will suck the blood of anything warm blooded, although there have been reports that it will even suck the blood of lizards. The mouthparts are a little like a harpoon with backward-curving teeth making it difficult to pull out once it has pierced the skin. Only the female has the hugely extendible skin enabling her to swell up with a large blood meal. As the tick bites it injects anticoagulants to keep the blood flowing, and painkillers, so that the host is unaware the tick is feeding on them. It also inject a substance which inhibits the host immune system.

The lifecycle usually takes 3 years, but when circumstances are ideal it can be as short at 18 months. When the egg hatches, usually about eight weeks after it has been laid, the larva has just 6 legs. Next spring the young tick climbs up grass or other vegetation to wait for a passing host. When something warm brushes past it grabs on to hair/material or just skin. The tick cannot jump, the host must be within reach. Then it wanders about the host till it finds a suitable place to suck blood. Around the ankles where socks and boots meet is a popular spot. The tick dries out quickly, so if a host doesn't pass soon it will drop to the moist ground before trying again, or may even overwinter without feeding, and try again the following spring. The first blood feed is usually from a small mammal. The tick has organs on its front legs which detect carbon dioxide and heat of a possible host. The resting period over winter is triggered by day length, and activity in spring is triggered by heat.

After feeding on the host it drops to the ground where it moults into an 8 legged larva/nymph resembling the adult.

Next spring it climbs vegetation and attaches to a host yet again for a blood meal. This time the host tends to be a larger mammal. It feeds for several days, then again it drops to the ground and moults into an adult.

Next spring it again climbs vegetation to suck blood. The female takes in a huge blood meal increasing her size greatly. Each blood meal takes around 5 - 6 days.

Male ticks detect females ready to mate by the pheromones the female releases. These can be detected from quite far away. Mating may take place on the host or after dropping to the ground, and can take as long as a week, with the male remaining attached to the female as she feeds. The males die after mating. The eggs are laid in the summer in crevices in the ground. The female lays around 2000 eggs over a 4 - 6 week period. Each egg is covered with a waterproof layer of wax. After the female lays eggs she, too dies.

Where to find ticks on dogs

The most common place to find ticks on your dog are on and behind the ears and between the claws.

I found the two ticks above on my dog. I used to treat her with Frontline, but this year the ticks are very bad and Frontline does not seem to be working.

I got the ticks out with a small, plastic tick remover I got at the local vet's. I was a bit skeptical at first, but it worked really well and was very easy to use. It is much easier than vaseline, and cheaper than whisky.

It is important to get all the tick out and the tick remover does this very well.

I will be trying Advantix on my dog next to see if that works better.

Yes, Advantix works well, and she's never had ticks since I used it on her. Apparently it depends on the area where you live. Ticks on upper Deeside are just tough to kill.

Ticks should be removed as soon as possible, even though it is difficult to get them out when they are really small, because they can transmit the bacteria that cause Lyme disease through their saliva.

Ticks are not picky, but if they have the time and choice on adult humans they prefer the breast and groin area, and in children the head and neck.

This is from personal experience. The tick above was on my elbow and looked just like a small black speck (it could not have been there for more than 12 hours). It was fairly easily removed with the tick removal tool I got for my dog. Then I bathed the area with alcohol.

It is important to get the tick out as soon as you can, as the longer you leave it feeding the more chance there is of it passing on the Lyme disease bacteria. Vaseline will suffocate it, and whisky or other alcohol will kill it, but hauling it out is quickest if you have a tick tool. Whatever you do don't squash it while it is attached to you as you will just squirt its gut contents into yourself. If you haul it off you will probably leave its head or at least its jaws inside you which may or may not go on to fester till they fall out. So do take care, and get someone else to twist it out for you. The plastic tick removal tool I got for my dog works wonderfully and has a small and big notch so fits all sizes of tick.

There are around 300,000 cases of Lyme disease diagnosed in the U. S. A. each year, 65,000 in Europe with about 2 - 3000 of these in the U. K. The numbers are rising everywhere. The tick carries the disease-causing bacteria Borrelia burgdorferi in its gut which it picked up during a blood feed from an infected mammal, and passes it on to the next mammal it feeds on (which might be you). In Scandinavia ticks are spreading northwards as the climate warms. In Scotland they are rarely found above 700m, but this is expected to change.

When the tick first starts to feed it can be as small as a poppy seed, and can easily pass unnoticed, as there is no pain or itching. After feeding, and once the tick has dropped off, there is usually, but not always, what is called the "bullseye rash" which is a red splotch or rash around the bite area. Next follow flu-like symptoms which are frequently ignored, or treated simply as flu.

If you discover and remove the tick within 24 hours, you usually escape infection. If it has been sucking your blood for longer, see a doctor. I have heard some stories from England that doctors pay little attention to requests for Lyme disease tests, so take the tick with you just in case. However, an accurate blood test cannot really be done until you've been infected for 4 - 6 weeks as the antibodies in your blood are slow to form against Lyme disease, so if your doctor asks you to wait for the test, he is quite correct to do so, and is not fobbing you off. If your test is positive a course of antibiotics will usually cure you. As with all antibiotics it is vital that you continue the course right up to the end.