This page, and the pages linked from it show the yearly lifecycle of a bumblebee colony. You can either follow the lifecycle in chronological order by looking at all of the pages in turn, or you can skip to whatever part you are interested in by clicking the links below.

This image below was taken on the 9th of July from the live feed from the bird nest box at Ferndown Upper School in Dorset, England that was taken over by Bombus hypnorum, the Tree bumblebee. The nest is well established and seems healthy. 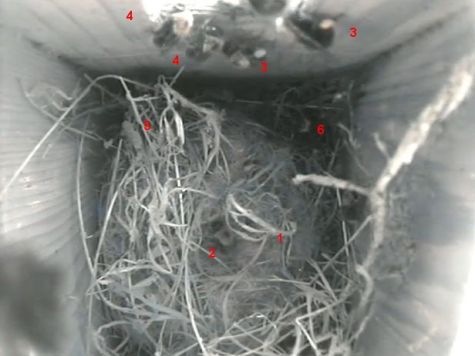 1. This round, knobbly object is the nest itself. Under this covering of wax will be the eggs, grubs, cocoons, queen, stores of pollen and nectar turning into honey. Not all bumblebees make a covering of wax over the cells, but in this case it is probably for protection.

2. This is a housekeeper worker. She will crawl around the nest clearing things up, performing repairs to the wax and taking out rubbish. Housekeeper workers are usually young and still secreting wax, or they may be deformed and unable to fly.

3. These two workers had just arrived back from foraging. They both have full pollen baskets - the pollen is the whitish blob on their back legs. They will go down to the nest and unload this pollen and possibly any nectar, then they will either have a rest or go off to work again.

4. These two workers are either having a rest, waiting to go out foraging or guarding the opening. They will allow in workers who have "their" nest smell.

5. This is an opening in the wax cover made by a worker this morning.

6. I think this is a dead bee as it hasn't moved for more than 3 hours.

Unfortunately the live feed was cut shortly after I captured this image, so I don't know what happened to the nest.

Below is a typical ground/surface nest. 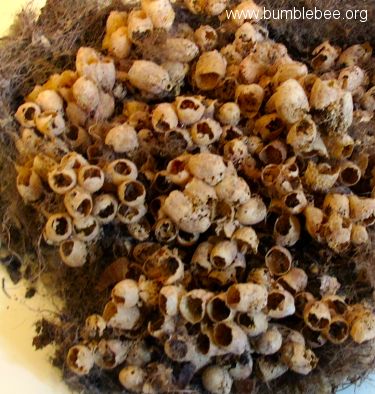 Above a Bombus lapidarius nest. Taken from The Insect Societies, by E. O. Wilson, 1972. The Belknap Press, Harvard University. This is an excellent book covering all the social insects, and has a very good chapter on bumblebees. It should be available in any good library.

When a new worker emerges her hair is silvery in colour and her wings are crumpled and soft. As you can see in the photograph below taken by Tyrone Williams. 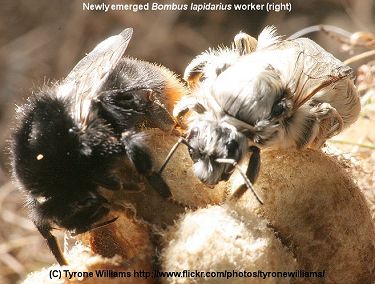 Within an hour or two her hair dries and starts to change to the colours seen in foraging bees, and her wings will harden in about a day.

During this time she stays in the nest.

However in a new nest the workers can start to forage after only two or three days, so this means that the queen can spend more time egg laying. In fact once the first lot of workers have started to forage the queen hardly ever forages. This may be because foraging is one of the most dangerous jobs in the colony.

Workers Make a mental map of the nest location

Although Bombus terrestris is usually the first queen to emerge, it is quite often B. pratorum workers that are seen first as B. pratorum nests reach maturity faster than other species.

This quotation is taken form The Humble Bee by Sladen (more info on the books pages), the most charming book I have ever read about bumblebees.

"The nest consists chiefly of workers, whose function in life is not to give birth but to labour for the establishment, bringing home and depositing in cells load after load of sweets (nectar and pollen), their only relaxation from this arduous toil being domestic work, such as tending the young, building the comb, and keeping the nest clean and tidy."

Below is a bumblebee nest in loft insulation. This is a very common place to find a bumblebee nest, and it poses no danger to your house. All you need to do is leave it alone and when the nest comes to a natural end there will be just a few dead bees and a little wax left over. If you leave it still longer even this will be cleared away for you by the scavenging invertebrates. 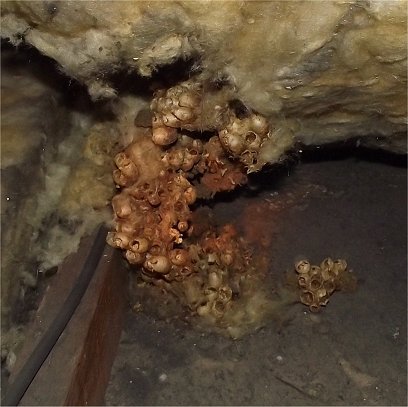