Bumblebee mating, death and hibernation; Stage 4 in the lifecycle of a bumblebee colony

Stage 1, the queen emerges from hibernation and starts new colony by herself.

Stage 2, workers (females) are produced and start to forage; the colony develops and grows. 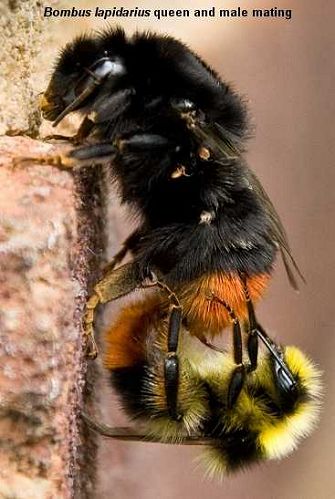 The hatching of males as adults usually signals the beginning of the end of the co-operation and organization of the nest. The males drink the stores of honey, but do not forage to replace it. Males are usually produced once the stores reach a sufficient quantity, or if the queen dies or loses her influence.

When the adult males emerge they spend a few days in the nest, but do no work, and then they leave the nest for good and forage for themselves. They can often be seen sheltering under the heads of flowers when it rains or when it gets dark. Well, that is what most of the books say, but recently it has been found that some North American bumblebee males do help in the nest by incubating the young, so their adult life is not just drinking, chasing queens, mating and staying out all night long. 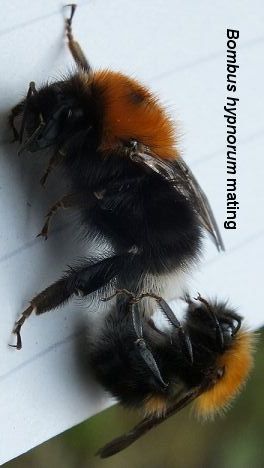 New queens emerge about a week or so after the males. The new queens leave the nest to forage for themselves, returning to the nest for shelter, but they do not add to the existing nest provisions. When the new queen is ready to mate she flies to where the attractant chemical has been deposited by the male and waits for a suitable mate. Then the two mate. Most queens mate just once though, but some species, e.g. B. hypnorum and B. huntii have been found to mate 3 times. 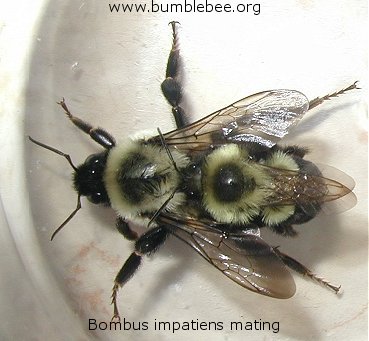 The adult male bumblebee (in common with most adult male insects) has only one function in life - that is to mate. Unfortunately it had been estimated that only 1 in 7 males actually achieve a mating. He will fly in a circuit depositing a queen-attracting scent pheromone produced from a gland in his head in suitable places, usually in the morning, and replacing the scent if it rains. Different species have different preferred flying heights for this, and different queen attracting scents. Sometimes the same route is used by the same species year after year although all males die each year, and so the new males have no idea where the males from the previous year made their circuit.

The pheromone is used to scent-mark prominent objects (tree trunks, rocks, posts, etc) on the circuit which is usually a few hundred metres long. The scent of some species can be detected by some humans. Usually the males patrol at species specific heights. Bombus lapidarius, terrestris and lucorum males patrol at tree-top height. Bombus sylvestris and hortorum within 1 m of the ground. However this depends on the habitat. Bombus hypnorum does not bother with the hassle of patrolling a circuit and laying down scent. The males just find a suitable nest where the new queens have not yet emerged and they hang around the nest entrance and make a nuisance of themselves until the virgin queens do emerge. Then it is every man for himself. 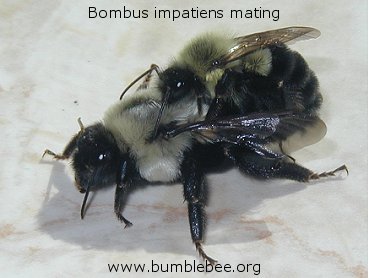 Mating usually takes place while resting on the ground or on vegetation, but there have been sightings of large queens flying with small males attached to them.. All the photographs above show that the mating is successful. At the start of mating the male grabs on to the queen's thorax to get himself into the correct position, this can be seen below in the Bombus lucorum photograph, only when everything is in position does he move back.

The photograph below was sent in by George at Nurturing Nature. 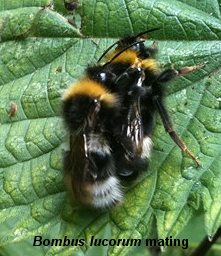 The time taken for matings varies widely from 10 minutes to 80 minutes. The sperm is transferred within the first 2 minutes of mating, and the bees are in a rather vulnerable position, so why do they continue for so long? Well after the male passes his sperm into the queen he pumps a sticky mixture into her genital opening. This genital plug takes time to harden, and once hardened can completely or partially block the entry of sperm from other males for up to three days. So even though the two are in a vulnerable position, it is in the interest of the male to hang on to ensure that his genes have a good chance of being passed on to the next generation, and as most males don't even manage to mate, and those that do usually just mate once, he wants to be sure his genes will be passed on.

The photograph below Bombus impatiens mating. B. impatiens is a bumblebee native to the Eastern U. S., but is also found in the western states. The photograph below shows clearly the size difference between the male and the queen. Also the creamy yellow hair on the male's "nose". In this species males often have hair that is a brighter colour than the queen and workers. The image below was sent in by a visitor to the bumblebee.org site. New queens usually search for a hibernation site soon after mating. 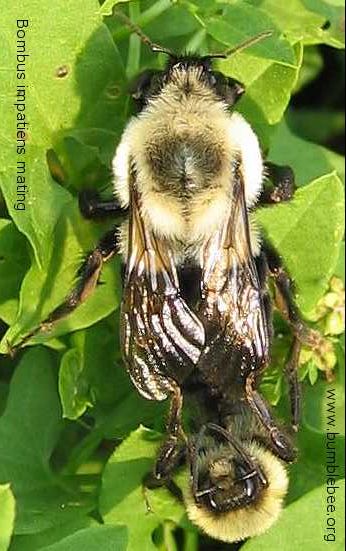 New queens and cuckoo females drink lots of nectar to build up their fat body and fill their honey stomach. This will enable them to survive the winter hibernation, then they find a suitable place to hibernate. They hibernate individually, but a good hibernation site can be dug into by many bumblebees. In the UK this is often under a tree root or at the base of a wall, but it is never in a place that could be warmed up early in the year by the winter sun. This is to prevent premature emergence. So in the UK the hibernation site and nest site are usually located in very different situations. As with many other animals that hibernate, it appears that bumblebees must reach a certain weight in order to survive the winter. For the largest bumblebee in the UK, Bombus terrestris, the queens must weigh at least 0.6 g to successfully hibernate and emerge next spring. It is during hibernation that queens can become parasitized by the nematode Sphaerularia bombi.

During hibernation if the temperature falls below a certain point glycerol is automatically produced in the queen's body. This is a form of anti-freeze and prevents ice crystals forming which would cause the fluids inside her cells to expand and her body to burst.

Hibernation actually lasts as long or longer than any other part of a queen bumblebee's life as it can last for 6 - 9 months depending on the species and the spring temperature.

By the time males and new queens emerge the old queen is almost bald and may have lost some of her influence over the persistent or larger workers, then gradually the stores dwindle and the remaining workers and old queen die.

Some species can produce more than one colony per year

There is some evidence that Bombus pratorum and B. hortorum may, under certain circumstances, be able to go through two colony cycles in a year. This would mean that instead of hibernating the new queens would immediately start a colony and the queens that emerge from this colony would then hibernate through the winter. B. pratorum and B. hortorum usually have quite small colonies, and B. pratorum colonies can reach their maximum size earlier in the year than any other species. This has been reported in the south of England where the winters have been milder recently, and there is plentiful pollen and nectar available from non-native flowers.

In New Zealand, where the winters are milder, Bombus terrestris, introduced just over 100 years ago to pollinate clover, can forage throughout the year, and in such colonies the number of workers can reach thousands.