Bombus pratorum is a relatively small bee and has a short tongue, consequently it is rarely found on vetches, but can manage to forage on white clover, lavender, sage, allium, cotoneaster, thistles and other daisy type flowers.

In the south of the U. K. queens fly from March, workers and males from April and new queens from May. So it is quite common to have two generations a year. In the north queens emerge later and there is just one generation a year. In the north and south workers can be seen foraging until September or even October. Preferred flowers include brambles, sallows, currants, rhododendrons, clovers, scabious, cotoneaster. Workers will nectar rob.

The workers are smaller versions of the queen (above, and below with tongue extended), but the abdominal yellow hairs can vary from being completely absent to being as abundant as on the queen. The males (below) have the greatest abundance of yellow hairs.

This bumblebee has the most colour variation of the six common species. The yellow bar on the thorax is usually there, but may be reduced to just a few hairs. The yellow bar in the middle of the abdomen often has a break in the middle, and sometimes it is just a few yellow hairs, and occasionally totally absent. The pink/orange/brown tail hairs are usually present, but the colour varies.

B. Pratorum nests are shorter lived than other bumblebee nests, averaging just 14 weeks. The size is small - medium with a maximum of 100 workers at most. And along with B. hortorum they have a reputation for nesting in unusual places, jacket pockets, fuse boxes, rolled up rugs, etc. Tit boxes that haven't been emptied from the previous year are especially favoured. If you find a nest in a place where it really must be moved the see the hortorum page. Like hortorum these bees are very placid and will cause no harm providing the nest is left alone and the entrance free of obstruction. The nests are parasitized by Bombus sylvestris.

It has been reported that they can have two or even three colonies a year especially in the south. That is new queens, instead of hibernating, will immediately start a nest.

Above you can see a Bombus pratorm worker with some pollen in her baskets sitting on some bare soil. She is warming up. It was a chilly day and she had been foraging on some nearby flowers. The bare soil was on a south-facing slope and so it caught the sun and would have been warmer than the surrounding air. Using the heat from the soil to help warm herself up will enable her to use less of the nectar she has gathered in her honeystomach for her flight home, and so she will have more for her sisters. For more on how bumblebees maintain body temperature see the warming up section. 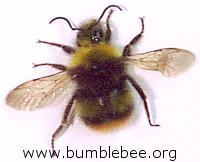 The photographs above and below show a male. It is easy to see that he is a male because of his colouring - he has so much more yellow, and also because he has no pollen basket on his back legs. The photograph below was taken early in the morning, and the male had stayed out all night, and was too tired and cold to move, enabling me to get really close. It is common for males to spend the night hanging under flowers. This means in the cold morning all they have to do is crawl up the stem to drink their breakfast then get on with the important task - actually their only task - of finding a queen to mate with.

Once a male (see photograph below) has left the nest he does not return. His sole aim is to mate, and he will patrol a circuit laying down a scent at strategic spots in order to attract a newly emerged queen who will find the scent so irresistible that she will allow him to mate with her.

The only other thing he does is drink nectar. So he will stay outside all night, usually clinging to the underside of a flower for some protection from rain etc. Often he will choose the same flower night after night. Then once the morning sun comes out he has just enough strength to climb - in the UK they are often too cold to fly - up to the flower entrance to drink some nectar and warm up ready for more scent patrolling. 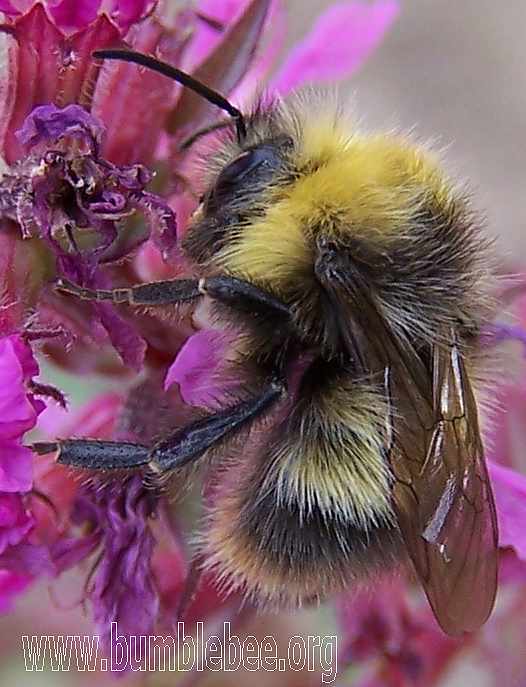