Less common species of bumblebee found in the UK, 1, 2

The bumblebee body can be divided into three main parts to make identification easy. These are:
The head, which can be quite difficult to see on a foraging bee as it is deep in the flower.
The thorax which has the wings and legs attached. It is really just a box of muscles. The biggest being the flight muscles.
The abdomen which has the honey stomach for storing nectar, the sting, the wax glands and all the digestive and reproductive organs.

Males have slightly longer antennae, bigger eyes, no sting and no pollen basket.

Workers are usually smaller than the queen. 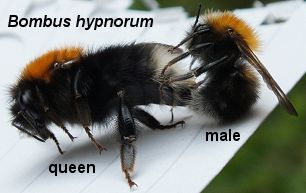 The photograph above was sent in by Julia Hedges. It clearly shows the size difference between the queen and male, and also that the male has a band of red/ginger on his abdomen which is absent on the queen. Workers are similar to the queen, but smaller.

Previously found in mainland Europe and right across to Asia and as far north as the Arctic Circle. First recorded in the UK in 2001 in Hampshire. Now found from southern England as far north as Aberdeenshire, Scotland. It is easy to recognise as it has a ginger thorax and a black abdomen with white tip. There has been a dark form of this bumblebee reported where the ginger hairs of the thorax is black but the white of the tail is unchanged. It has been most commonly found in gardens, and often nests in bird nest boxes. Nests can contain around 3 - 400 workers, but 150 workers at peak is more common. The queen may have some yellow hairs on her abdomen. Males can have some yellow hairs on the face. Queens are known to have multiple matings, although genetic studies have shown that most of the resulting offspring have the genes of a single male. Males have been noticed hovering in groups outside the entrance to bird nest boxes where there is a hypnorum nest with new queens ready to emerge. Some of the groups of males can be quite large and this can alarm some people, however there is nothing to worry about. Males have no sting and are only interested in newly emerging queens. It is presumed they are waiting to mate with the new queens. 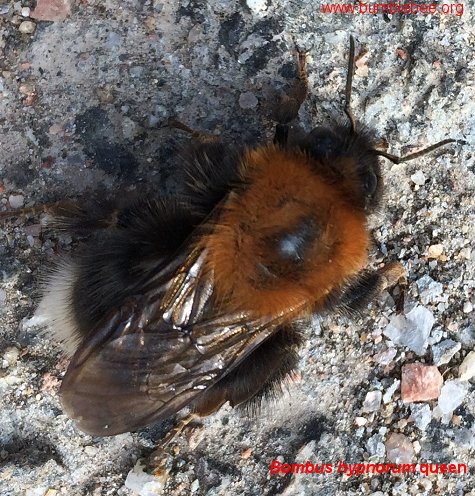 Queens fly from March, workers and males from May. This indicates that there may be two generations a year in some areas. 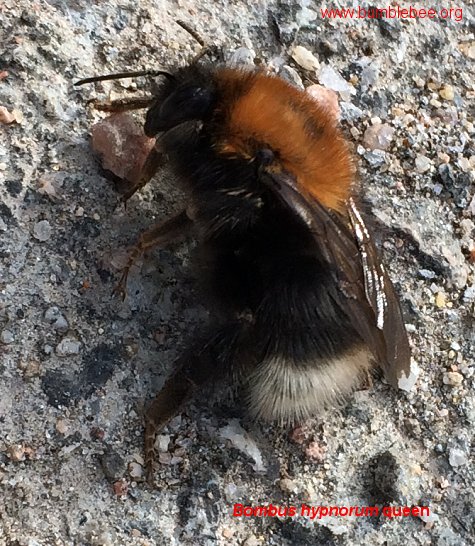 It is a short tongued species, workers forage off brambles, roses, raspberry, cotoneaster, comfrey and rape.

If you have always wondered what goes on inside a bumblebee nest then click on this page click here.

The wax moth is a very common invader of B. hypnorum nests, and in the U. K. by the time the presence of the moth caterpillars are detected it is usually too late to save the nest. 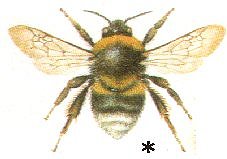 Often found in heath and moorland. More frequent in Scotland, and southern England. It is found in gardens and calcareous grassland as well as heathland. Favourite flowers include heathers, sallows, clovers, scabious and thistle. The queen (above left) and workers look the same, the male (above right) has more yellow. This species resembles B. hortorum but doesn't have the long face that hortorum has. There is some variation in the hair colour of the queens and workers. Sometimes the yellow hairs can be a pale yellow or almost cream coloured. Another variation is for there to be more black hair. Nest are found underground and on the surface. The nest size is small, usually with no more than 50 workers at a time. It is parasitized by Bombus sylvestris.

In the south the queens can appear as early as March, and there may be two generations per year. In Scotland queens do not usually emerge until May. Body lengths, queen 16 mm, worker 12mm, male 12mm. Forewing length queen 13 mm, worker 10 mm, male 11 mm. Short tongued. 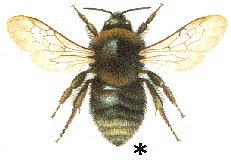 Workers and queens can be intermediate (above) or pale (below left), males tend to be pale. There is also a dark form (below right). Now found in just a few sites in England, and almost extinct, however it flourishes in New Zealand where they were introduced in 1885. Also has been found in Argentina since 1994, and may be causing the decline of the native B. dahlbomii. Prefers flower-rich areas, especially those with vetches, clover, comfrey, knapweed, thistle, borage, viper's bugloss and nettle. Prefers to nest underground. Nests contain a maximum of 150 workers. Queens fly from May, workers from late May, and males and new queens from June. 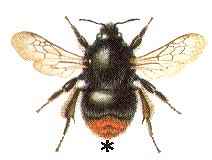 A lowland species found mainly in Southern England. Queens and workers (above) have pollen baskets framed with reddish hairs. Males (below) are similar to Bombus lapidarius. Queens fly from April, workers from May, and males and new queens from June. Preferred flowers include dead nettle, sallows, vetches, clovers, scabious, brambles, thistles. 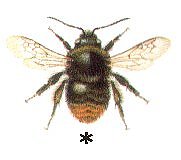 The UK status for this bumblebee is nationally scarce. The preferred nest site is on or just below ground. Colonies have a maximum of 100 workers. 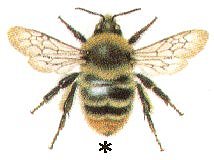 In UK found in only 7 sites in S. E. England. Population is declining steeply. Preferred nest sites are on or just below the ground. The nests are small with fewer than 50 workers at most. Has a higher pitched buzz than other bumblebees. The bands of colour are not very distinct and the mix of colours gives the bee a grey look. Queens fly from May, workers from late June, and males and new queens from August. Preferred flowers include white dead nettle, everlasting peas, clovers, vetches, bramble, teasel and scabious. 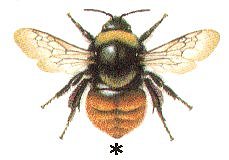 A moorland species, often found pollinating bilberry (Vaccinium myrtillus), cowberry and cranberry. Found in declining numbers in the north and western highlands in upland heaths, sometimes as high as 100 m. It is always found near bilberry, crowberry or cranberry. Queens fly from April or May, workers from late May, and males and new queens from July.