There are 2900 species of Psychodidae worldwide and 99 British species; all very small (less than 5 mm adult body length) with hairy, pointed wings. Above is Psychoda sp., an adult owl midge or moth fly. They have tiny eyes with few facets, and seem to rely more on their antennae than their eyes. The antennae are covered in sensitive hairs that pick up scents and vibrations. Often the adults can be found in huge swarms around sewage filter beds, and in such habitats are an important food source for bats. The adults fly both during the day and night in spring and summer. In many species the adults do not feed. In warmer countries some species are blood feeders, and are known as Sand flies. These can be vectors of disease such as sand fly fever (Leishmaniasis).

The larvae (see below) feed on decaying matter and are aquatic or semi-aquatic.

Above is the larva of Pericoma pseudo exquisita it has 26 chitinous hair-bearing plates in its back. It is found in moss, algal mats, and dead leaves at stream margins. 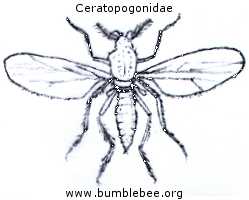 Above is a tiny biting midge, these are sometimes called punkies or no-see-ums, and below is the larva. There are 5600 species in the Ceratopogonidae family world wide, and 170 British species. The adult female feeds on the blood of warm- and cold-blooded vertebrates as she needs a blood meal for her eggs to develop. As she bites she releases a recruiting pheromone which attracts other adults to the good food source. She can afford to be generous in telling others of the food source as she takes such a minute amount of blood from such a large host (often us).

In some parts of the world they are carriers of disease, e. g. they can transmit the blue-tongue virus to cattle and sheep. U. K. species are just 2 - 3 mm long, and the males have plumose antennae. Midges in Scotland have a wing beat of over 1000 beats per second. Compare this with other insects.

In the U. K. and northern Europe the larva are up to 12 mm long, transparent, with a worm-like body and a radial tuft of hairs at the end of the abdomen. They are abundant in small pools and ditches, especially those with peaty water and filamentous algae. They are weak swimmers. 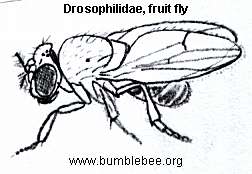 The Drosophilidae are commonly known as the fruit flies and vinegar flies. They are found world wide, and there are around 3900 species in the world and 62 British species. All are small, brown, grey or yellow flies, often with brightly coloured eyes, and the adults are 2 - 4 mm long. Above is a typical adult fly. They feed on decaying and/or fermenting plant materials, fungi, flowers, and a few species are even predators of other small invertebrates. They are commonly used in genetic studies as they have large chromosomes easily obtainable from the salivary glands, and they have a very short life cycle. They have a wing beat of 300 per second. Compare this with other insects. They can fly 10 kilometres a day.

Drosophila melanogaster is the most common species used in experiments. The species originated in west Africa, and breeds on rotting fruit. It was first recorded in the U. S. in the 1870s, on the east coast. Studies carried out on this small fly have led to a better understanding of biology, genetics, development and evolution; not just of this species, or even flies in general, but also the causes of a variety of diseases in humans and other animals. We owe this little fly a lot.

The adult female can lay up to 75 small, white eggs per day, and from 400 - 900 in her life time. On hatching the larva burrows into the food material where it stays, eating its way through its food, until ready to pupate. At 25oC the life cycle takes around 11 days. Adult lifespan is 40 - 50 days, but some individuals can live for 80 days. 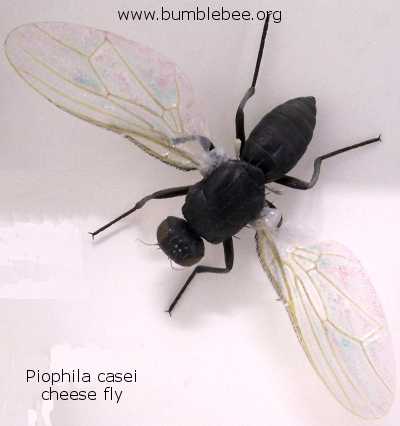 The Piophilidae were previously known as the Neottiophilidae or Thyreophoridae. There are 80 species world wide and 14 British species. Not all the species have larvae that live in cheese; some are found in dung, carrion, fungi, and birds' nests where they are blood suckers. However all larvae can jump in the same way as the cheese fly - see below.

Above is Piophila casei, the cheese fly, cheese skipper. The larva (below) are called cheese skippers or hoppers. Adult body length is 5 - 6 mm, and wingspan 7 - 8 mm. They get this name because when disturbed the larvae can flex their bodies to cause them to jump as much as 15 cm. They do this by using their mouth hooks to latch on to their rear end, then flexing their body and letting go. The larva grows up to 10 mm long.

They will also feed on ham and bacon, and have even been found on human cadavers. After all we have been making cheese for a few thousand years at most, and the cheese fly has been around for millions. It is believed that it may have originally lived off carrion. The adults are small, shiny and black, often with a bluish reflection. In good conditions the life cycle can be as short as 12 days.

There are around 200 species world wide and 15 British species in the Dixidae family, which are also known as the Meniscus midge. The adults are like gnats, but have hairless antennae. They are small, brown and have long antennae. They are always found reasonably close to water. 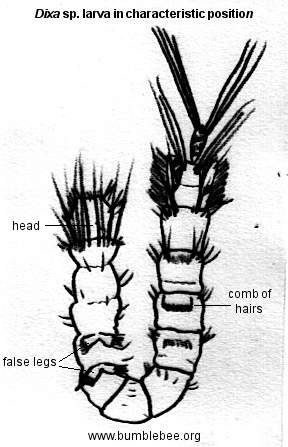 The larvae are aquatic, and found in weedy ponds where they live near the surface among floating leaves. A fully grown larva can be 6 mm long. The body of both larva (above) and pupa (below) is usually held in a u-shape at rest making it easy to recognise. Other aquatic fly larvae and pupae do curve into a U shape, but do not rest in that shape.

It feeds on microscopic particles suspended in the water, which it collects in the brushes of hairs in its head as it moves its head to and fro. The tail end is usually out of the water. The pupa (below) lies motionless at the surface with its tail curled up to be level with its head.