Symbiosis means living together, and there are three kinds of symbiotic relationships between species: 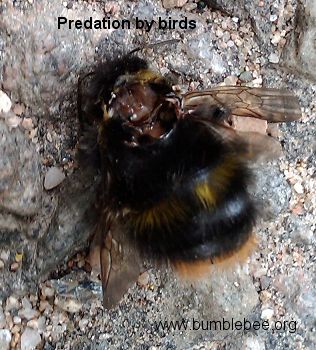 Probably more bumblebees are killed by parasites than by predators. This may be because the bumblebee females are armed with a sting, but it is also due to the protection given by their warning colouration.

Some crab spiders ambush bumblebees at flowers. These spiders do not spin webs, but sit and wait for their prey to come within reach. They are well camouflaged. In north America Misumenia vatia catches bumblebees as they land on flowers.

Robber flies catch their prey on the wing in their legs. And in north America have been found to prey on bumblebees.

A few species of bird can remove the sting before eating the bumblebee, e.g. bee-eaters, spotted flycatchers, tits and shrikes. The Bombus lucorum queen below was probably killed by a bird, as was the one above where the thorax has been emptied. They rub the sting off before eating the abdominal contents which would include the honeystomach.

In the U. S. there are wasps called beewolves in the genus Philanthus, these wasps specialize in hunting bumblebees. The bumblebee is caught while feeding and is paralysed with a sting, it is taken back to the nest and enclosed with a wasp egg in a cell; there are usually about five bumblebees in each cell.

All of the above are predators of foraging bumblebees.

Other predators break into nests and include badgers, who will eat the entire brood, wax, stored food and any adult bees that do not escape. In north America skunks do the same. Foxes, minks, weasels, bears, field mice and shrews are also predators. In Iceland the mink is the major predator. However there is no mammal that specialises in bumblebee predation. More recently I've been hearing of hedgehogs which break into bumblebee nests that are above ground and not in solid structures. Like badgers hedgehogs would relish the grubs and any stores of honey and pollen.